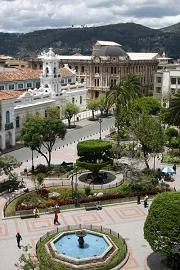 Ecuador, a small country on the northwest coast of South America, provides a wealth of diverse experiences for the adventurous traveler. Most flights arrive in the capital city of Quito, nestled in a valley between volcanic mountains. The old city of Quito, or Centro Historico, was named A UNESCO World Heritage Site in 1978 and is well worth a visit. The beautiful cobbled streets teem with vendors, sidewalk musicians, and historic churches. Quito also boasts great architecture and a myriad of museums.

Sport-loving travelers can find much to do in the countryside that surrounds Quito. Buses are inexpensive and run regularly to almost anywhere you might want to go. Hiking, rock-climbing, rafting, and bathing in hot springs are just a few potential activities accessible as day-trips.

In fact, the valley just south of Quito, also know as "Volcano Alley", is home to a number of the world's most active volcanoes. Although Chimborazo is the country's highest peak, at an elevation of 20,560 feet, the most famous volcano is probably Cotopaxi. While the Chimborazo is inactive, Cotopaxi has erupted an average of 20 times per century. Glaciers top both, an unusual trait for volcanoes near the equator. If your lungs are strong enough for the elevation, you might want to consider taking a guided volcano trek while in Ecuador.

Despite the impressive volcanoes, this vibrant country is probably best known for The Galapagos Islands, Darwin's inspiration for his work on evolution, The Origin of Species. The isolation of the Galapagos, (over 600 miles from the mainland) accounts for its incredible displays of flora and fauna. If you're feeling brave, you can walk right up to lava lizards, penguins, blue-footed boobies, and massive sea lions and tortoises. Visitors should consider taking a guided cruise or tour in order to see as many areas as possible.

While in Ecuador, be sure to check out the street markets, where one can haggle over everything from beautiful tapestries and shawls to Andean jewelry and instruments. The town of Otavalo has an especially interesting market and is just 2 hours from Quito by bus. Otavalo is also part of Ecuador's lake region, which boasts a number of volcanic crater lakes.

Cuenca, another UNESCO World Heritage site, is another city worth seeing while in Ecuador. They host brilliant flower markets as well as traditional food and handcrafts markets. Cuenca also offers a beautiful Museum of Modern Art, situated in a Seventeenth Century building surrounded by flowered courtyards. Much more colonial than other parts of the country, Cuenca is filled with stately white churches and mansions. Be sure to check out the Plaza San Sebastian and the Cathedral of the Immaculate Conception while visiting Cuenca.

The food in Ecuador can be fantastic and often includes fresh seafood, exotic fruits, and roasted meats. Try to seek suggestions from the locals and look for restaurants with live music. You will be especially captivated by performances of the beautiful El Yarabi music and the groups of native Andeans, which often include players of the guitar and rondador, a small flute-like instrument. Salsa clubs are also popular and are a great place to witness some incredible dancing!