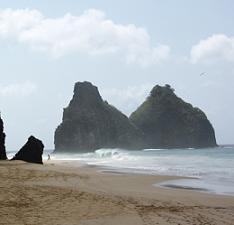 Think of South America and one of the first images to come to mind are its fabled beaches. Some of the best-known seaside playgrounds in the world are here, from small and sophisticated urban playas to miles of empty white sands away from it all. While there are thousands throughout the continent, the beaches of Brazil, Argentina and Uruguay are in a league of their own. Here are eight of South America's very best.


Buzios, Brazil
Just two hours north of Rio and with more than 20 separate beaches to choose from, Buzios is one of South America's best-kept secrets (although word is getting out fast). Famous as much for its exuberant tropical flora and wild landscapes as for its crystalline waters, Buzios offers a mix of the sophisticated and the rustic, with something from everyone's budget, from the backpacking surfer to the couple on a honeymoon. There are plans to develop the area further, so visit while it is still a tranquil and (relatively) unknown spot.


Copacabana, Rio de Janeiro, Brazil
The world's best-known beach, Copacabana is relatively small by South American standards (less than 2.5 miles) but manages to pack more action into its length than any other strand on earth. A hedonist's paradise, Copa, as it is affectionately known by locals and visitors alike, has something for literally everyone. Its celebrity-studded New Year's Eve parties and concerts are legendary, and for years it has been a hotbed for every type of beach sport imaginable.


Ipanema, Rio de Janeiro, Brazil
Next door to but very different from Copacabana, Ipanema sprung to fame as a result of a single song four decades ago and seems to grow more popular each year. Rather upscale and less raucous, Ipamena shares its neighbor's immaculate white sands but trades Copa's multi-sport focus for a surfing and windsailing preference. Located in one of Rio's most expensive neighborhoods, it is well patrolled, although a meal at one of the beach-side restaurants will set you back more than anywhere else in Brazil.


Fernando de Noronha, Brazil
To get to Noronha, as the locals call it, requires a stopover flight to Natal or another nearby city, followed by a connection to a tiny archipelago in the midst of the Atlantic. It is a trip well worth making, as the beaches here are not only unspoiled and among Latin America's most pristine, they're also protected and mercifully free of large groups of tourists. Because of its isolation, Noronha is not cheap, but if you want seclusion and luxury with your beach vacation and are willing to pay for it, this is the place to visit.


Guarda do Embau, Brazil
Still relatively unknown to travelers, this beautiful, family-friendly beach outside of Florianopolis combines a tranquil mix of a calm sea, a brilliantly white strand of sand, lots of peace and quiet, a picturesque village nearby, and some excellent surfing conditions. It may not be this way for long, however, so see it now in its pristine glory.


Punta del Este, Uruguay
Some 87 miles (140 kms) east of the capital Montevideo, beautiful Punta del Este is the premier upscale beach resort in Uruguay and indeed, all of South America. Technically made up of five distinct yet interlinked strands, each has its own atmosphere, audience and even different colored sands. Punta remains very much a haven for the jet-setting crowd and is famous for its regattas and other yachting events. The city, often underestimated by tourists, is a great place to see colonial architecture.


Salinas, Ecuador
Dedicated adventure-sport beachgoers may know Salinas, but few others outside of the locals do. Considered Ecuador's best beach, it boasts the finest tourism infrastructure in the country and is a favored spot for hand gliders, jet skiers, surfers, windsurfers and sport fishermen, as well as the country's top spot for whale watching. Plans are underway to open a huge theme park in the area for families, but the beach here remains immaculate.