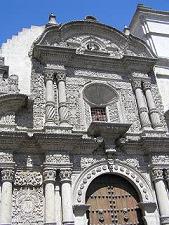 It is often said that South America is a blend of the past and present, and that to understand what it is today one must understand what it was, and particularly its three centuries of colonial rule. While modern South America has its own unique identity, it is forever linked to its rich past, especially its splendid architecture and rich cultural legacy. Here are seven of the best places to see the continent's colonial past on display.


Ayacucho, Peru
Founded in 1540, Ayacucho is a UNESCO World Heritage Site for good reason. Known for its religious festivities during Semana Santa, or Holy Week, and often called the "city of churches" for its no less than 33 colonial temples adorned in high baroque and rococo style, it also boasts dozens of beautiful colonial-era houses with ample patios and interior courtyards. It has several period museums, many with rare works of art and gilded sculptures covered with layers of precious metals.


Cartagena, Colombia
Cartagena is a beautiful seaside port in northern Colombia steeped in colonial history. Once one of the richest cities on the continent, its imposing Spanish fort, the most extensive in South America, was built to protect the town from pirate attacks. The entire old port section and the Palace of the Inquisition should be on every visitor's list to see.


Cusco, Peru
Cusco is, in a word, amazing. Peru's first UNESCO World Heritage Site, it is considered the best-preserved South American colonial gem, behind only Potosi. It vies with Mexico City for the claim of Latin America's oldest city, and is also the archaeological capital of Peru. Its primary draw is its innumerable colonial churches, convents, houses and municipal buildings. Several of these are now top-rated museums and galleries. A walk through almost any section of Cusco is like stepping back four centuries of time.


Olinda, Brazil
On the northeast coast of Brazil, Olinda, now a UNESCO World Heritage Site, is a wonderfully preserved colonial gem, unique in the degree to which it has incorporated not only its European, but also African colonial past. The downtown still has a pronounced Old World charm. Pristine colonial-era churches and buildings, some of them with fairy tale castle-like appearances, are found everywhere. Olinda is perhaps even more famous for its splendid annual Carnival.


Potosi, Bolivia
When Potosi was inscribed as a UNESCO World Heritage Site, it was discovered that the city has the highest density of colonial monuments in the Western Hemisphere. From almost the minute you arrive in this high-altitude city on the windswept altiplano of Bolivia, you will be struck by its ornate churches, nearly one hundred at last count, and astonishing royal mint. The viewing options here are almost endless, ranging from early colonial to pre-Independence monuments of all types and sizes, many of which are free or cost next to nothing.


Quito, Ecuador
Also a highland city (and the country's capital), Quito is a marvel to behold, especially at night. For many travelers to the continent, the view of this UNESCO World Heritage Site from the nearby hill of El Panecillo is the most beautiful on the continent. Its cathedral is a striking example of baroque splendor, and according to the United Nations, its historic center is the largest and best-preserved of all South American colonial cities.


Salta, Argentina
Salta, one of Argentina's oldest cities, was a Jesuit frontier outpost with a storied past, much of which is preserved in the city's impressive museums and libraries. Many buildings reflect the traditions of colonial architecture, and it is the only major Argentine city whose museums focus more on the past than on modern culture. In particular, the Cathedral and San Francisco Church are impressive legacies to a past that is still very much alive here.