South America has a huge variety of landscapes, from active volcanoes, to lush rainforests and grassy plains, to the pristine white-sand beaches of Brazil, and the majestic snow-capped peaks of the Andes. Described below are some of the most spectacular and dynamic regions on the continent.

Patagonia
The Patagonia Region is home to the most picturesque landscapes in South America. Situated in Southern Argentina and Chile, this region features the Perito Moreno Glacier, one of the few advancing glaciers in the world, as well as pristine Andean national parks, lakes and alpine forests. The lake region also features a wide variety of outdoor activities, particularly in Bariloche, a popular ski resort set in the scenic mountain of the Andes. Further south in Glacier National Park you'll find a mountainous landscape dotted with glaciers and a variety of rare and unusual wildlife.

Andes Mountains
The Andes features some of the most spectacular scenery in South America with its dynamic variation of terrain. There are pristine lakes and rivers, glacier parks, Inca ruins, snow-capped peaks, and lush rain forests, making it a great place for outdoor adventures, including some of the best skiing in the world on the eastern slopes. It is also the longest mountain range in the world, running 4,500 miles along the west coast of South America. It passes through seven countries, Bolivia, Ecuador, Chile, Peru, Venezuela, Colombia, and Argentina, making it accessible for most travelers bound for South America.

Brazilian Coastline
Here you can enjoy the bright blue waters, white-sand beaches, and beautiful coral reefs, which make it an excellent area for swimming and snorkeling. Brazil is a great place to begin your adventure, especially since it has the longest stretch of coastline in South America.

The Amazon
This regions encompasses many different types of landscapes, including rainforests, mountains, lakes, and grasslands. It is also home to the largest ecosystem on the planet and over a dozen major rivers. It is situated next to the Andean border in the west and covers over 1.4 million square miles that stretches across the continent.

The Pantanal
In the wetlands of the Pantanal, the visitor explores the greatest wildlife South America has to offer. Stay at a nature lodge, and take unforgettable excursions into the wild. 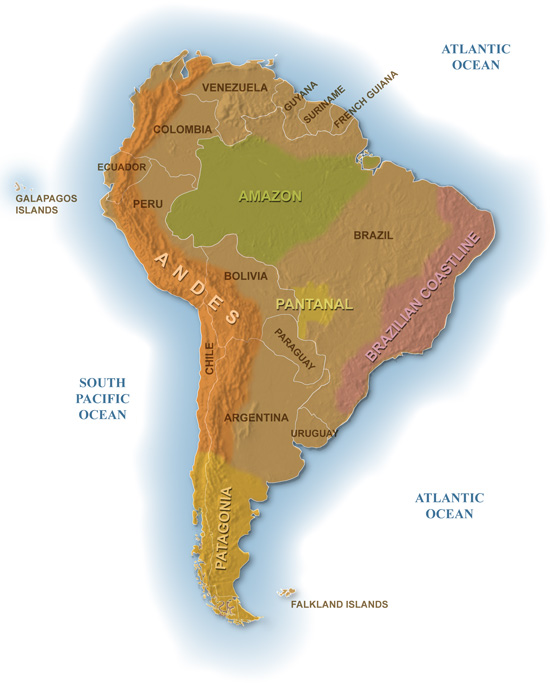